Five Entrepreneurship Tips from Lord of the Rings 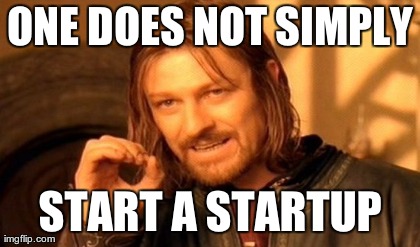 How is the Fellowship a startup? Oftentimes, entrepreneurs in startup companies are fully aware of the risks they are taking and the low amount of resources they have to accomplish their tasks. This is exactly what each member of the Fellowship agreed upon at the Council of Elrond, and on their quest to throw the One Ring into the Crack of Doom, they provided a case study filled with vital lessons in entrepreneurship.

1. You can never do a big task alone

When it comes to running a startup, companionship is key. Frodo could have never carried the Ring all the way to Mordor if it hadn’t been for Samwise’s insistence on going with him.
Even if someone at your startup is adamant on doing a task by themselves, ask them if there is anything that they need a little support in for what one does in a startup affects all.

2. Within every failure lies an opportunity to innovate

Over the course of their journey, the Fellowship failed many times. Their biggest failure is arguably the breaking of the Fellowship at Parth Galen. Although the Fellowship was split up, they re-evaluated their goals and hacked their way into even greater successes against the forces of Sauron and even united the Men of the West!
If a project is not going the way you planned, take time to critically evaluate and measure your goals, for the path to victory may lie in new, fresh approaches.

3. Build a team with Diverse Strengths

One reason why the Fellowship was so successful in their quest was because their team so diverse with many different types of knowledge to help them succeed. With Hobbits, a King, a Wizard, an Elf, A Dwarf, and a Knight, the Fellowship had a diverse skillset that allowed them to best any obstacle, from navigating the Mines of Moria, to diplomatic relations with the Elves at Lothlorien.
Create a team for your startup where you won’t find any gaps in knowledge within the team. For example: a team of Hobbits simply wouldn’t be able to defeat Trolls, just like how a team of Programmers aren’t nessecarily equipped with the skills to make a compelling sales pitch.

4. Create Value and Build Relationships with other companies

Always be on the lookout for new relationships and partnerships to help you achieve your goal. The Fellowship could have never defeated Sauron without one of their biggest allies, the Riders of Rohan. But in order to build that alliance, value had to be created. Gandalf created value for the Rohirrim after he freed their King, Theoden, from the grips of Saruman’s curse.
As a startup, make sure to carve your own niche and create unique value that will give you a marketable bargaining chip to use when forging relationships with other companies. Help them succeed, and they will in return help you succeed.

Every connection you’ve made and every relationship you’ve built should always be kept in mind, for they can help in surprising ways when you are in a pinch. Near the end of the War of the Ring, Aragorn, realizing that the combined armies of Gondor and Rohan would not be enough to save Minas Tirith at the Battle of Pellenor Fields, turned to an old connection – the ghostly Dead Men of Dunharrow. An ancient connection, this Army of the Dead helped the Fellowship to defeat Sauron’s Army and save the White City from falling.
Even if you’re the most successful startup, always remember the people who helped to get you there in the first place and make sure you are consistently engaging with them and providing value for them, for they may come a day when you’ll need them yet again.
Although these lessons may seem obvious, they are also easy to forget! Always think of your startup as having a high impact mission like the one presented in The Lord of the Rings, and you will always be motivated to innovate.