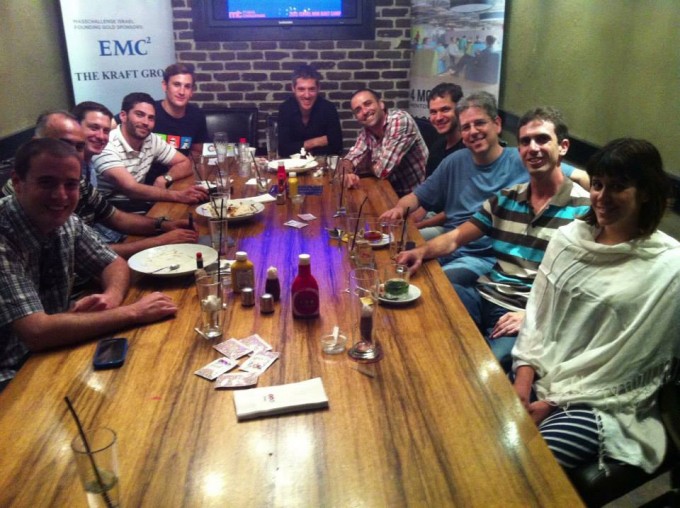 The seven MassChallenge Israel Finalists that attended were:
DialogWhiz – gives structure to web discussions, making them truly effective for getting informed and making decisions
Greenvolved is an evolution of crowdfunding for environmental projects that lets individuals and corporations to co-operate- for our planet
MedAware – Improved health care through elimination of prescription errors
MobiStine – Do you care about your pregnant relative? We do care too; MobiStine provides trusted healthcare apps for new parents for better healthy life
Pixtr – Pixtr understands content of photos and automatically perfects them accordingly – bringing true photo editing to mobile
Vecoy Nanomedicines – develops patent pending virus-traps for the treatment of HIV/AIDS and other viral infections
Wizeo – is a crowdgiving platform designed to raise funds and awareness for non-profits by driving engagement through online video events
The caliber of speakers at MassChallenge Israels Mini Boot Camp, which took place at the center of innovation in Herzliya, Microsoft Israels R&D Center (also home to the Microsoft Accelerator), was unparalleled. Each speaker was relevant, relatable, entertaining, educational, inspiring, and insightful.
The first day included a dinner with Dr. Orna Berry, Former Chief Scientist of Israel and General Manager of EMC Israels Center of Excellence. She spoke about herself very briefly as her reputation is well known. She spent the majority of her time answering questions posed by the startups where she had insightful answers regarding pricing for mobile apps and the importance of IP when working with large corporations.
To start day two off, Former EMC executive and Venture Capitalist at Greylock Partners Israel, Erez Ofer, came to speak to the startups. When asked about some of the key differences between venture capitalists in Israel and the US, Erez said that the US venture capitalists have larger networks and more partners, so he advised startups to find the people who understand what they are doing, the best connections are those that are created on a personal level.
Next, Founder and CEO of hola!, Ofer Vilenski, shared his entertaining, humorous, and unparalleled experience and insight, He challenged each one of the entrepreneurs to really question their startups by asking How much value can I bring to how many people? He emphasized that the idea doesnt matter, business model doesnt matter, but what matters is execution.
For lunch, Benny Schnaider, founder of Ravello Systems and active angle investor in Israel, chatted with the finalists regarding his personal experience as an entrepreneur and investor, as well as how he achieved his success. Having lived in America, Benny was able to answer many questions about the different ways Israelis and Americans do business on an interpersonal level.
The rest of the day consisted of Gilad Pinhas of ERB Financial, Yael Biran of Mintz Levin, and Jeff Goldman of Jeff Goldman Immigration answering detailed and specific questions the startups had about starting and running a business in the United States. The value of this session was within the details as many of the finalists are starting a business in America for the first time.
What was unique about MassChallenge Israels Mini Boot Camp was the intimacy of the event. This was a private event held for just our 15 MassChallenge Israel Finalists. The level of interaction between everyone in the room was unlike any other event or conference. New friendships were formed between the startup companies, professional relationships were established between the speakers and startups and two of the companies, who had never met before, decided to live together in Boston!
MassChallenge Israels Boot Camp forged the values of collaboration and teamwork between the startups that MassChallenge strives to create in its Boston office space. One could sense the unity amongst the MassChallenge Israel startups and their excitement to accelerate their companies to the next level in Boston! The MassChallenge Israel finalists will be flying to Boston this month, ready to accelerate their startups to the next level as part of MassChallenge!
Click to view more photos of the MassChallenge Israel Mini Boot Camp