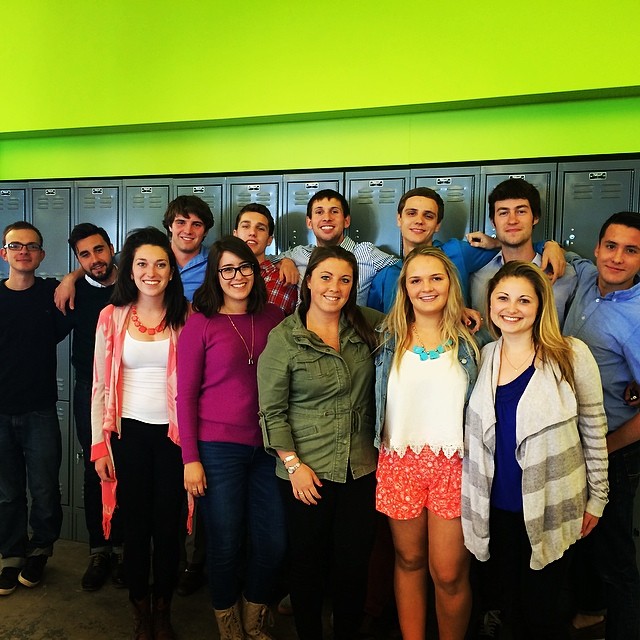 Alec Ortega is a rising junior majoring in computer science at Suffolk University. Alec is eager to learn about new technology startups and how the innovation affects his field of study. He works as an IT and operations intern at MassChallenge with the responsibilities of building IT infrastructure for our new building and handling day to day operations. Alec enjoys graphic design and will be helping with branding material as well. He also fenced for four years!

Alex Hoder is a film production major at Emerson College. Alex learned about MassChallenge from an internship fair and wanted to help make a difference by helping startups reach a wider audience. He works on the creative team and creates promotional photo and video material for MassChallenge and its 2014 finalists. During his internship he wants to learn more about the startup communities and strengthen his production skills. Alex enjoys playing tennis and biking. He is also spending his final semester in Los Angeles in the fall!

Ashley Gentile graduated from Suffolk University with a degree in public relations. She works with various teams at MassChallenge including events, operations, creative and public relations. Ashley is excited to see the ideas of startups come together into successful businesses. She appreciates the outdoors and especially likes kayaking and exploring Boston. Ashley has also traveled to 15 countries!

Brandon Bourgea is a rising senior majoring in business administration at the University of Vermont. A friend recommended that he check out the business development program at MassChallenge. Brandon works on in-kind sponsorship management and loves the unpredictable environment of entrepreneurship. He hopes to improve his business skills and gain insight about nonprofits from the MassChallenge network this summer. Brandon loves hockey and baseball and is a huge Boston sports fan!

Chris Stenson is a rising senior majoring in economics at Boston University. Chris is a mentorship intern at MassChallenge and helps connect entrepreneurs to valuable resources and mentors. He believes that young people in Boston will make key contributions to spur economic development through entrepreneurships. Chris is especially excited to engage with the 2014 finalists with a focus on energy. He enjoys playing rugby and the guitar! Chris also went coast steering in Wales!

Erin Delaney is a rising senior majoring in strategic communications at Elon University. Erin is a content marketing intern and is responsible for managing social media accounts and working with alumni engagement. She thinks entrepreneurships have a positive impact on the business world and global community. Erin is excited to network and engage with the 2014 finalists and ultimately watch their ideas transform into realities. Erin loves meeting new people and exploring new places. She even traveled to 16 countries in a four-month period on Semester at Sea!

Gabe Diaz-Barriga is a rising junior majoring in business at Babson College. Gabe was an intern at MassChallenge last summer and decided to come back to work with the design team again as a graphic design intern. Gabe hopes to create graphic design material that he can add to his portfolio and learn from the experiences of the 2014 finalists. Babson strongly promotes entrepreneurship and Gabe wants to eventually become an entrepreneur himself. He also loves frisbee and rock climbing!

Joe Khoury is a rising sophomore majoring in finance at the University of Massachusetts Amherst. Joe works on the events and operations team and aims to plan happenings that will help startups succeed. He assists in various aspects of event planning and communication from facilitating keynote speakers to planning workshops and panels. Joe wants to gain a comprehensive understanding of the startup subculture and learn how to develop a successful business. Joe even has a company of his own where he sells sticker posters of his artwork. He loves painting, drawing and cliff jumping!

Lars King is a double major in entrepreneurship and marketing at Northeastern University. He was inspired by a speech John Harthorne gave to the entrepreneurship club at Northeastern and decided to participate in a business development co-op at MassChallenge. Lars generates qualified leads for potential international, corporate or foundation sponsors through networking and Internet research. He proposes the value of MassChallenge to sponsors and works to provide them with lasting value after closing the deal. Lars hopes to apply the valuable lessons he takes away from MassChallenge to his future ventures. Lars also has his pilots license!

Leigh Grinberg graduated from Boston University in May with a degree in hospitality. Leigh works with the events team as a special events intern. She coordinates with tour groups and helps plan curriculum for startups to take part in during the accelerator program. She views her work at MassChallenge as crucial for entrepreneurs to get connected to the people that will help them succeed. Leigh hopes to learn how to put on meaningful events with limited funds. She enjoys running, reading and exploring new places. She also likes to brush her teeth in the shower!

Nick Creegan is a double major in business administration and Spanish at the University of Richmond. Nick thinks that entrepreneurship is key to solving economic problems and was excited to join the MassChallenge team as a business development and UK expansion intern. He hopes to learn about obstacles that entrepreneurs encounter and how they can overcome such challenges. He also wants to gain general business development skills such as pitching and closing deals. Nick loves cooking and trying new foods. He also has three passports from the United States, Switzerland and Spain!

Paola Camargo is a communications studies major at Emerson College. Paola learned about the opportunity to work as a photo and video production intern from an internship fair at Emerson. She is excited to learn in a professional atmosphere and expand her horizons in the communications field. Paola is passionate about photography and is excited to see the creativity that the 2014 startups have to offer. She also loves hanging out with her greyhound!

Peter Page graduated from EPFL in Switzerland with an environmental engineering degree. He heard about a MassChallenge from one of the award ceremonies and was hired as a MassChallenge business development intern by a former colleague at Swissnex. Peter works on planning the international timeline and designing the partnership webpage. He appreciates the learning process involved from creating entrepreneurships from the ground up. Peter hopes his internship will improve his skills in sales, negotiations and public speaking. He also enjoys playing golf and soccer!

Sarah McDonald is a rising sophomore at Davidson College and although her major is undeclared she is thinking about political science or economics. She is currently working as a business development intern and working on sidecar prizes and brining in new leads to potential sponsors. During her internship, she hopes to gain a better understanding of how large-scale nonprofits operate. Sarah likes how MassChallenge helps expand opportunities for the business sector that will ultimately benefit the community. She enjoys outdoor activities such as running, skiing and going to the beach!

Summers Ford is a rising junior with a double major in interactive media studies and media culture at Miami University of Ohio. A family friend recommended that she look into working with MassChallenge and she jumped at the chance to become a marketing intern. She hopes to gain valuable real world work experience by managing MassChallenge social media accounts and assisting with the organization event planning. Summers loves people watching and eating clam chowder in Boston. She is also distantly related to Elvis Presley!

Yonny Reichel is a rising junior majoring in economics at Boston College. One of Yonnys professors told him about MassChallenge and he explored the option to become a business development intern at Boston Colleges career center. He works on sponsorship coordination and various aspects of global expansion. Yonny thinks entrepreneurship is a great medium to reach economic expansion and progression by developing innovative ideas and improving technology. He hopes to take advantage of the valuable contacts he is introduced to through MassChallenge. Yonny loves music and is even a DJ! On a side note, is real name is actually Jonathan but he goes by Yonny.

Stephen Yell graduated from Skidmore with a degree in psychology and business. He is a marketing intern and works as a startup evangelist for MassChallenge. Stephen helped recruit high quality startups and analyzes data to improve marketing techniques. He admires the passion of entrepreneurs to solve problems by building an organization from the ground without asking for permission. Stephen is excited to learn about the infrastructure of startups and how they work in the Boston ecosystem. He also loves music and is even in two bands!

Paige Friedlander is a rising junior at St. Lawrence University with a double major in sociology and communications. Paige is an events and operations intern. Along with greeting people at the front desk, she helps make sure that everyone is happy and enjoying the MassChallenge space. She also assists in coordinating events to make sure that speakers and incoming groups are satisfied and prepared. Paige has a passion for helping people and in this position she gets to do that all the time; she enjoys meeting the startups and seeing how amazing they all are in individual ways. They inspire her to push her limits and she hopes to help them along their journey with MassChallenge. Outside of MassChallenge, Paige is a national level synchronized skater!