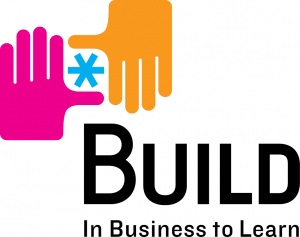 BUILD is a four-year program that uses entrepreneurship as a hook to motivate at-risk students to succeed in school and pursue a college education. The organization matches teams of high school students with mentors who help them develop ideas and business plans for viable, marketable products.

Five teams of freshman from Charlestown High School, Another Course to College, Community Academy of Science and Health, and the Jeremiah E. Burke High School pitched their innovative ideas to a panel of judges in the hopes of winning up to $1,000 of prize money. The Final Round judges included; Michael Curry-President of Boston NAACP, Diane Hessan-Chairman of Communispace, Jonathan Abbot-CEO of WGBH and new board member of MassChallenge, Nick Varano-owner of Strega Restaurants, Larry Webster-Chairman and CEO of Racepoint of Global and owner of W2 Group, and Rich Paret of Crashlytics, and Damon Cox, Director of Jobs & Economic Development at The Boston Foundation.

Out of the five teams that competed, the winning idea was B-Ties, a three-in-one bow tie that can be worn traditionally, as a necklace, or as a hair clip. Christopher Stephenson, the mentor who worked with the B-Ties team stated, I know what its like to pitch, to deal with failure, but to see kids at 14 or 15 going through this, showing courage and creativity, it was the most amazing experience. These kids not only learned about entrepreneurship and how to pitch a business plan and, they also learned how to believe in themselves and their ideas.

After the competition, Giselle Martinez, a member of the winning team said, I used to be really shy. I wouldnt talk in front of the class, but with BUILD, I learned to have confidence in myself. BUILD is an organization that enables kids to believe in themselves and encourages them to pursue their ideas. Our very own Fhiwa Ndou and Justin Normand attended the competition and talked about their impressions of the event. Fhiwa described the judges and competition as, unreal. It was great to see BUILD bring together such a diverse group of movers and shakersit’s impressive to see that key players like Diane Hessan (Communispace), and Jon Abbott (WGBH), are committed to supporting entrepreneurship, even at the high school level. It is truly inspirational to see such prominent figures in Boston working together to encourage budding entrepreneurs to pursue their dreams and achieve success. Justin explained how by the end of the competition he believed that BUILD allows kids to feel like they are valuable, intelligent, and capable of incredible things. For some of these kids, it might be the first time they’re feeling this way, and it gives us and them hope for the future.

Programs like BUILD remind us of what entrepreneurship is truly about; the ability to believe in a dream and turn it into a reality. The B-Tie Team is a testament to what anyone, no matter their age, can achieve if they persevere, work hard, and believe in their vision. In recognition and appreciation of their hard work and inspiring determination, we here at MassChallenge, want to offer the pitching teams from the Youth Business Plan Competition a tour of our office! We want to offer the teams a chance to experience first-hand, a professional startup work environment and learn more about MassChallenges mission and the importance of innovation in Boston.