In the Third Wave – Startups Will Finally Grow Up 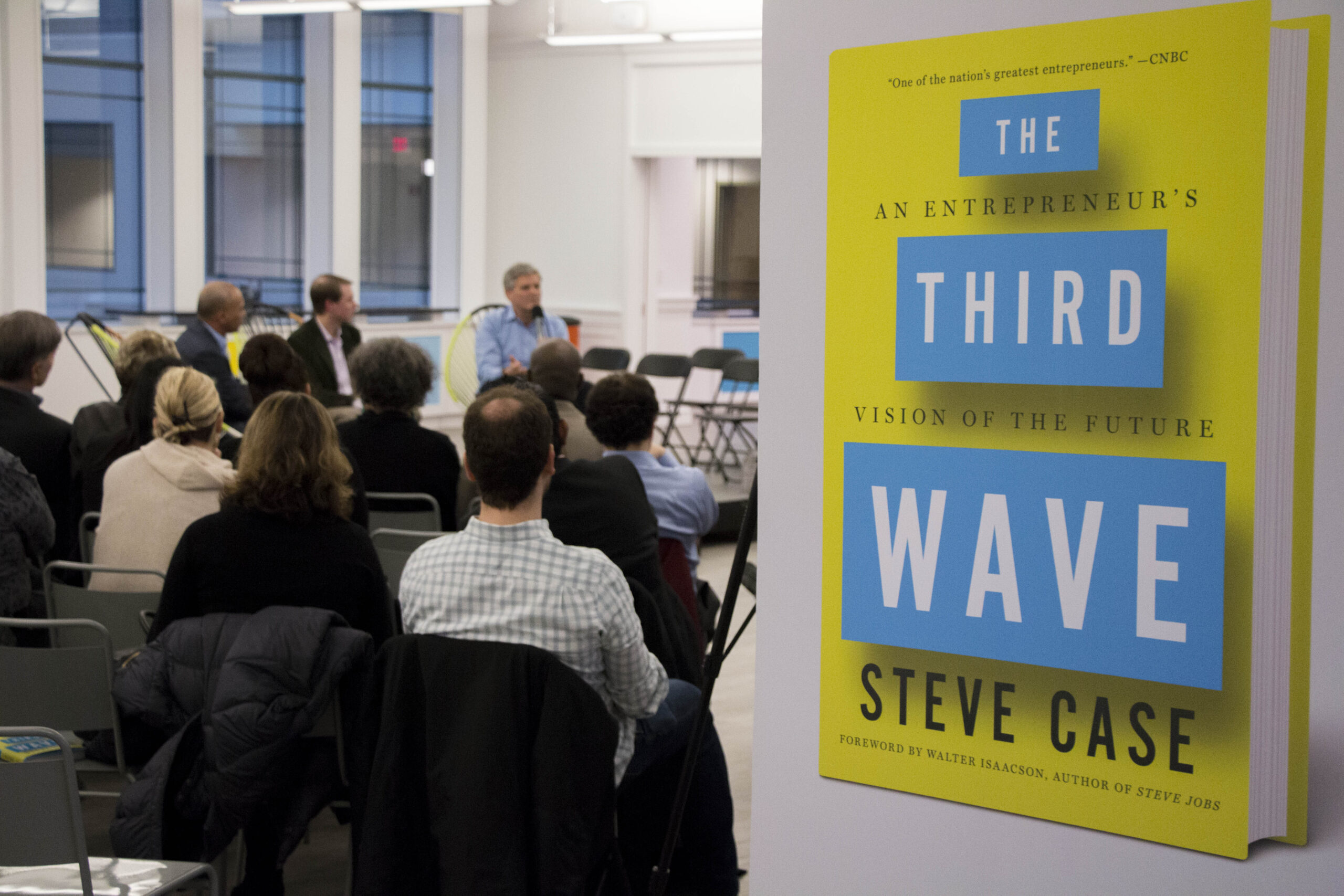 From the nearly endless consumption of snacks, to the nerf darts that litter the floor and pods that are available for napping — the hallmarks of offices built by top startup executives are deliberately engineered to encourage play, not work. You see this lampooned in HBOs Silicon Valley, but for the past few years, entrepreneurship has been imbued with a certain sense of infantilism.
It was perhaps slightly ironic in a space that featured a swing set that Steve Case, in a conversation about his new book, The Third Wave, with former Governor Deval Patrick and MassChallenge CEO John Harthorne, spelled out the end of the type of fast growth, app-based tech companies that so dominated the Second Wave.
The End of Petulance
“If you want to create apps, go for it. but if you want to change the world you have to work with partners you have to engage with government, you have to engage the larger corporations — the gatekeepers. Its going to require more perseverance.” – Steve Case on the value of collaboration

A key theme that Mr. Case touches on seems like a rude awakening for some: startups need to start collaborating with those that they perceive as competitors. These competitors include the large corporations they are trying to disrupt as well as the Government. Startups cant work in silos anymore. To emphasize the point, Mr. Case cites an African proverb, “If you want to go quickly, go alone. If you want to go far, go together.” This philosophy is precisely what startups need to embrace if they are to survive the alleged valuation crunch.
Much like in the growth of a child to an adult, entrepreneurs will have to consider the needs of stakeholders that come from wildly different backgrounds and worlds. As budding world-leaders, entrepreneurs need to be held accountable to a higher standard.
In the Third Wave, where entrepreneurship will seep into industries that affect our everyday lives, therell be less room for viral overnight successes such as Facebook or Twitter, because those institutions, such as health, education, or telecommunications have gatekeepers.
Moonshots Require Perseverance
Its going to require entrepreneurs to work harder and persevere to win those partnerships with gatekeepers and create real impact. Real innovation in civic technology will come through working with organizations like Microsoft directly, real impact in pharmaceuticals will come when entrepreneurs work with Pfizer directly, and true disruption in IT will come by working with Cisco directly.
Corporations and governments also need to meet these startups halfway. Mr. Case advises that large corporations need to be more curious, be more agile, and partner with people around their company. Corporations are gatekeepers for sure, but that gate needs to open for innovation to flow through. Thats how the Third Wave will help our society flourish. Everyone needs to work together. Everyone needs to work — not play — to fix some of the worlds most pressing issues like hunger, access to health, and education.

Third Wave companies may not be the kinds of fast-growth unicorn companies like Uber or Airbnb and their offices may not be strewn about with nerf darts, but theyll be rife with skilled, dedicated, and diverse experts from all walks of life, working together to solve real problems instead of creating the next hot app. The economy of the Third Wave will be an economy where moonshots will become the norm. Solving big problems: a natural consequence of growing up.

You can purchase Steve Case’s The Third Wave: An Entrepreneur’s Vision of the Future on this website.