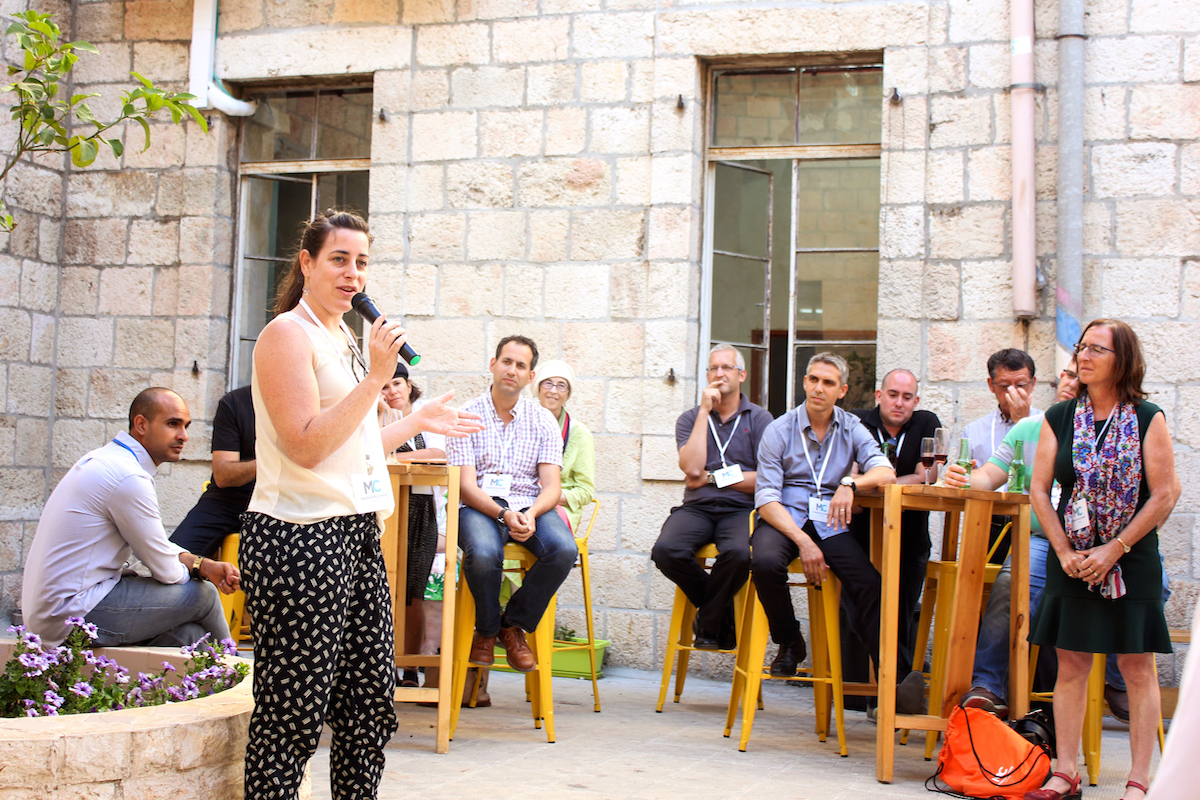 As an entrepreneur, speaking in front of an audience is absolutely impossible to avoid. Startup founders have to pitch ad infinitum, whether they’re addressing entire crowds or just small panels. If you’ve already got it down, congratulations – you’re going to be a star. If you’re like most people, public speaking can be pretty nerve racking.

Martin Martinez, founder of A-Player Media, stopped by MassChallenge Texas to share some of his own tips on public speaking. There are a ton of nuances to effective public speaking, but Martinez emphasized one major point: it ain’t gonna kill you. So knowing that you’ll survive your presentation no matter what, here are some of the things you should remember before you take the stage.

Martin Martinez, founder of A-Player Media, exuding confidence on stage at an event.

For some quick tips, check out the list at the bottom of the page.

In the 1970s, a professor at UCLA studied the effects of language, tone and body language in communicating a message. His research showed that, on average, words only account for 7% of the weight of personal communication. The rest of the speech’s impact breaks down into 38% tone and 55% body language.

Of course, this distribution doesn’t apply to every single form of communication. And, obviously, the language you use to describe your ideas in a pitch will matter a lot to people who have never heard about your company.

But whatever the context may be, it’s a good idea to incorporate a dynamic tone and forceful body language to really drive home the message behind your presentation. You could be saying some revolutionary stuff, but if the angel investor in the tenth row doesn’t feel that energy, then they might not bite.

“Regardless of what you think of the leader of the free world – he’s a master at this. When he talks, he dominates body language. You know if you pull up a transcript of his words, none of it makes any sense. It’s just word vomit … So don’t memorize a speech … What you’re doing as entrepreneurs, as startup founders, you’re not reading off a list. You’re not reading the Gettysburg Address.”

Remember President Barack Obama? Same here. Anyone watching one of the former president’s speeches will quickly notice the measured pace that he employs. Taking substantial pauses in the middle of his sentences made his messages even more impactful. Someone even took the time to make this video of Obama’s best pauses.

“The power of silence is just as strong as a very forceful tone inflection to cap off a sentence,” Martinez said. “Don’t worry about rushing out your pitch. If you’re concerned about time … you gotta really look back at what you’ve written out and start scratching out sentences and words. Don’t use five words where three will do.”

As startup founders, your allotted time to give a convincing presentation is usually limited. In some competitions, you might only have 60 seconds to move the audience.

Even though every second is precious, you should run through a cost-benefit analysis before your speech – will your presentation be more convincing with every word you cram into it, or will it suffer from density and confuse people? Be honest with yourself.

Your End Goal Is the Conversation

Remember that your presentation doesn’t end when you exit the stage. The success of a pitch should be partly measured by the conversations that follow.

Whether you’re looking for immediate funding or you’re just pitching for constructive criticism, the pitch itself is practically worthless if you don’t follow up with the audience in some way.

Martinez recommended that you scan the audience during your presentation to really gauge who’s paying attention. You’ll be able to tell which people are locked in, and those are the people you’ll want to meet once you’ve presented.

“I can tell who’s listening and who’s lost in their laptop because they’re multitasking on Slack,” Martinez said.

Get Your Feet Wet

It takes a lot of experience to get to the level where you can be called up, by surprise, in front of an audience and flesh out a coherent, engaging presentation. Everyone knows that practice makes perfect, but it’s easy to forget that there are a few ways to practice public speaking.

Participating in pitch events, taking improv classes, creating podcasts, and broadcasting livestreams are just a few forms of communication that require you to think on your toes and continuously deliver words to whoever is listening.

Public speaking is nerve racking. Even if you stick to a script, those nerves can spoil your presentation overall. When you’re not locked in when you’re presenting in front of a crowd, you’ll probably miss opportunities to blow them away. That can mean funding that you’re not getting, connections that you’re not making, and name recognition that falls through the cracks.

Find those low-stakes outlets for public speaking where you can safely prepare for the high-pressure moments. Follow up with your audience if you really want to gain something from your presentation. And, of course, remember that public speaking can be dreadful – but it ain’t gonna kill you.