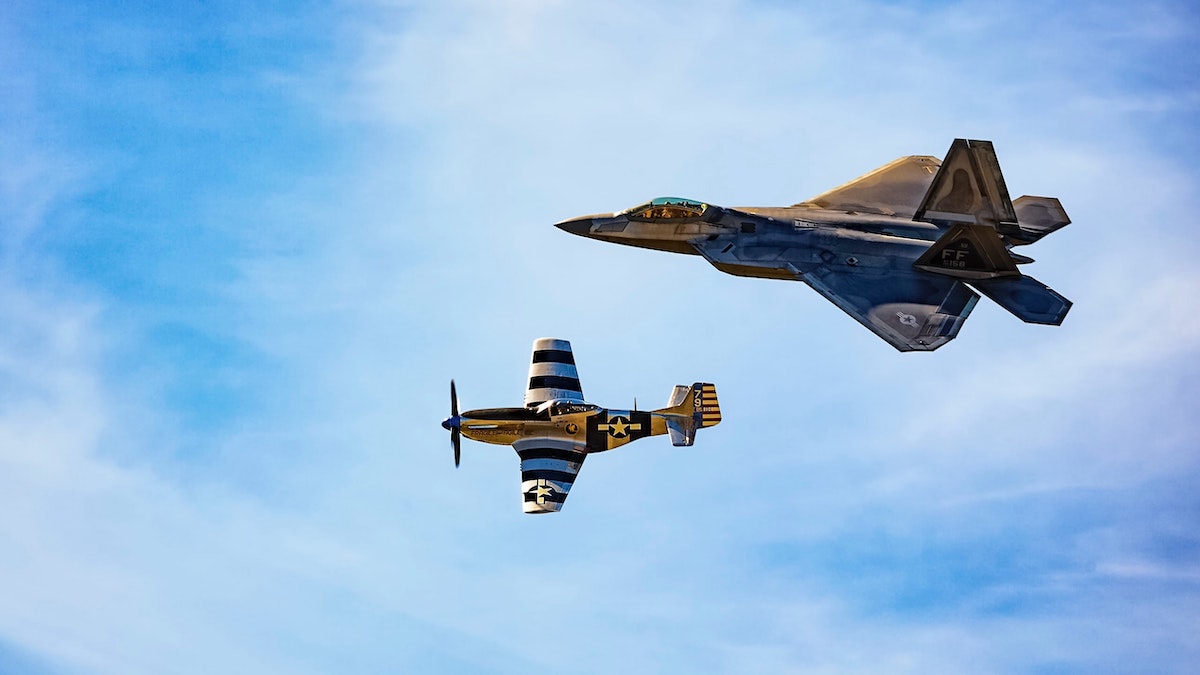 As an early-stage startup founder, working with the government or even considering working for the government is daunting. Right at the start, it has to be realized that “the government” is not a single entity, but comprised of thousands of different departments, organizations, expectations, and different criteria for funding opportunities.

However, it is important to know that the U.S. government, more than ever, wants to work and support startups, even at early stages. In recent years, large strides are being made to help entrepreneurs navigate the relationship in a far more efficient manner.

The sheer amount of available capital and venture funds in the commercial markets, make it a simple mathematical decision to pursue that path for scale – venture capital investment has increased over 10,000 times what it was in the 1960s and 1970s, while Pentagon budgets have decreased over the decades in the area of global research and development.

However, solely focusing on commercial industry is not the ideal path for a lot of new technologies (more on this below). The optimized path for startups in the “Tough Tech” sector or other advanced solutions is to find a balance. This has led to what MIT’s Innovation Initiative as dubbed dual-use ventures (DuVs) which are typically deeply-technical startups that can or could serve both the commercial and government customers.

There are significant advantages to achieving this balance like research and development stability, market guidance, and client acquisition while still maintaining commercial scalability. There are also tricky obstacles.

As Jonathan Miller, an expert in Tough Tech lab-to-market wrote, “for an experienced DuV founder, it’s complicated; for an aspiring DuV entrepreneur, it can be downright off-putting.”

The problems an entrepreneur faces include, to name just a few, an exhausting list of acronyms, extensive application criteria, lack of insight into current or competing startup solutions, and classified requirements. On top of this, the government acquisitions process can be slow moving and is heavily regulated, with different forms of contracts and colors of money. Traditional venture capital can view this as a detriment and distraction when investing in an early-stage startup.

On the flipside, these are hurdles government innovation teams and intrapreneurs are trying to solve as well. Innovation is huge part of U.S. national security and the private-industry-government collaboration is a critical component to this. Just as large corporations are relying more and more on startups to address the immense speed of technological develop, governments around the world are doing the same. However, there is significantly less, or sometimes zero, separation between industry and government with competitors and advisories of the United States, and years of acquisitions slowed by bureaucratic procedures has put the U.S. in a less than advantageous position.

Over the past decade, and specifically over the past several years, the U.S. is transforming their approach to technology acquisition and “non-traditional” industry collaboration to create more harmonious ecosystems. Again, siting MIT, a healthy innovation ecosystem includes risk capital, startups, universities, corporations, and governments. 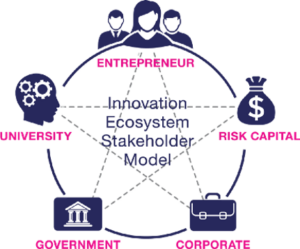 Recent acquisition reforms in the Department of Defense have made significant progress in the speed with which they can contract and collaborate with startups. Adopting VC and private industry approaches like agile development, accelerator engagements, pitch days, creating early-stage programs and outreach efforts to better educate entrepreneurs about the opportunities available to them with the federal government.

Dr. Will Roper, the assistant secretary of the Air Force for Acquisitions, Technology and Logistics, has embraced and promoted the concept of failing fast and failing forward to help reform the acquisitions process that is the foundation to building the competitive advantage we need. A sample of Dr. Roper’s thoughts on the matter are below:

“This is part of a broader vision we have to return Air Force to its innovation roots,” said Will Roper, the Air Force’s assistant secretary for acquisition, technology and logistics during a Nov. 6 media availability. “We want to be where innovation is happening. We want to partner with commercial companies that have aspirations to make the world a better place with their technologies, but make it clear that there is a way to work with the Air Force to achieve that objective … Innovation is going to be its own competitive domain, almost a battlefield. And we’ve got to win the innovation battle.”

For example, the Digital Directorate of the Air Force is focused on faster innovation adoption. They have been supporting an increasing number engagements with the innovation ecosystem, to increase exposure to top technologies and to be a hub for software development.

Another example is the creation of the Cyber Resiliency Office for Weapons Systems (CROWS), which has implemented new due diligence procedures to vet and work more efficiently with “non traditional” industry partners and startup. The office strives for a faster acquisition process to deliver tools, cyber-focused intelligence, common security environment, education, training, and a cyber-savvy workforce to program offices throughout the Air Force.

Even with these efforts there are still several nuances and specific criteria when applying to present and/or work with these organizations. These specifications, as mentioned earlier, can make it difficult to balance the private-government sector for already stretched entrepreneurs. However, if there is strong alignment between a startups commercial roadmap and opportunities to work with the government, then the collaboration can be validating effort that drives product development further on both fronts.

How Accelerators Are Bridging the Gap

Since 2009, MassChallenge has been working to support collaboration between large corporate innovation teams and agile startups. Increasingly over the past several years, MassChallenge is applying that ecosystem approach and model to supporting startups engagement with the federal government.

If we look back to the Innovation Ecosystem illustration, MassChallenge can be found at the center, connecting relevant stakeholders, with a specific emphasis on supporting startups. 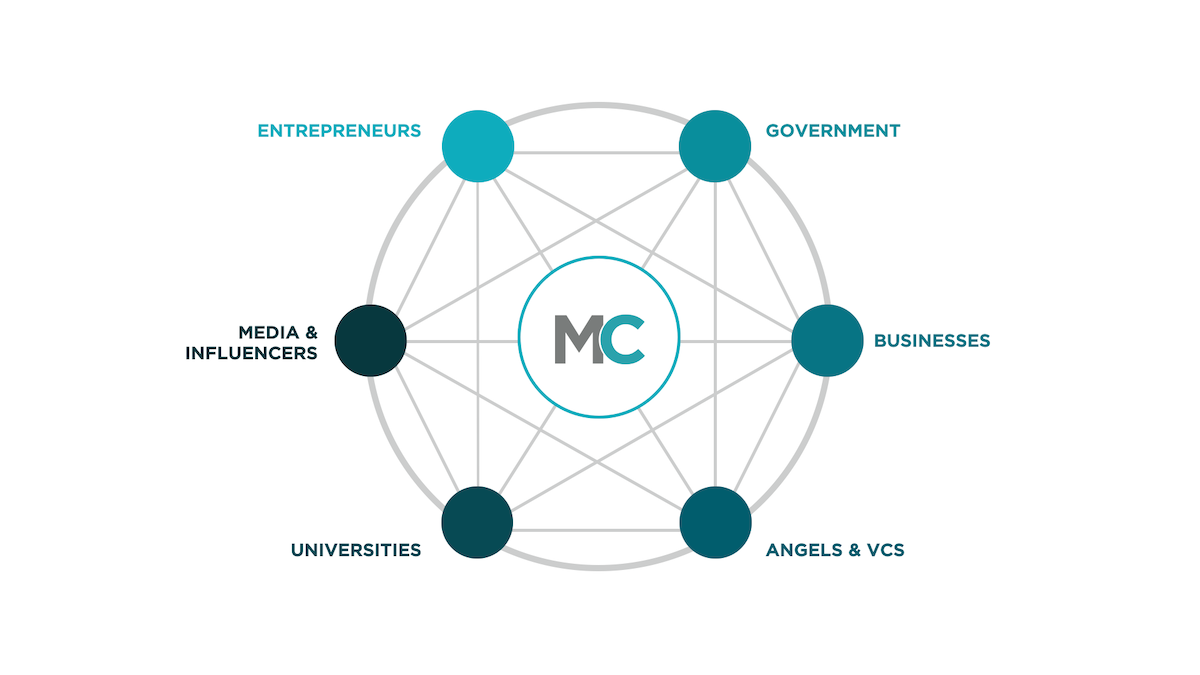 At its core, MassChallenge believes that early-stage founders and startups can truly benefit from the non-dilutive financial support and technology/platform validation that working with the government can provide.

We see a great benefit the startup community by removing the traditional barriers to engagement and providing the education, connections, and continued support of those relationships to drive collaboration for both industry and government.

MassChallenge created the Safety and Security Track in 2019, to support “dual use” startups better connect with the federal government and the defense innovation ecosystem. The goal of the program is to help educate and support our founders with the opportunities and resources that are available, while providing them the tools and best practices to succeed in making the government a customer.

Our aim is to help you get your foot in the door. The official program is described as follows:

Select startups will receive specialized support, strategic exposure, expert mentorship, and industry resources as part of the program’s Safety and Security track. The Safety and Security track accelerates, connects and educates startups with direct or potential relevance to national defense and public safety applications accelerate their commercial and defense pathways to scale. S&S track, now going into its third year, provides partners a demonstrated platform to access and support the next generation of high impact, high potential dual-use that will be impacting our national security. S&S is sponsored by BAE Systems, MITRE, NSIN, the U.S Airforce, and Raytheon.

We see the Safety & Security Track as our 0 to Phase I program, helping teams receive their initial Phase I SBIRs. With the support of our partners, experts, and ecosystem, we are bringing together relevant resources and guidance to support these teams to success.

Air Force Labs supports AFWERX Phase I awarded startups from their Phase I to Phase II SBIRs proposals to help transition a greater number of teams, helping close the gap of the valley of death that traditionally exist for these startups. The program provides founders with strategic exposure to potential customers and network resources to help secure MOUs for Phase II proposals.

In addition, the Banshee Innovation Training program helps educate our service members and Airmen in particular to take an entrepreneurial and agile approach to acquisitions with innovation training. It is our hope to build a network of innovation focused service members that are able to support startups make the right connections within the Department of Defense.

By educating, connecting, and supporting our founders and defense innovation partners, we want to bring everyone to the same table with a common language and understanding of the processes in support of removing the traditional barriers to impact at speed.

The following is an interview with Alex Brickner, the CEO of SimpleSense, an emergency response software that improves response times by 6+ minutes, reducing loss of life, serious injury, and downtime. SimpleSense is a 2019 MassChallenge Finalist.

When initially applying to MassChallenge, what were the struggles or challenges you were having with SimpleSense that you were thinking MassChallenge might help with?

SimpleSense had early success with our service in a small market, and we needed help growing in a bigger market with more customers, and this included an interest in government agencies.

Throughout the program we had opportunities to meet with mentors at Fortune 500s and government innovation labs like KesselRun and AFWERX, which really helped us get up to speed on the whole federal acquisition process. Additionally, we got expertise and advice from other entrepreneurs in these labs that have won government contracts in the past and were willing to help out others.

At the beginning of MassChallenge, SimpleSense was solely in the commercial market. What shift, or series of events, happened that led to being more government facing?

When you started pursuing government funding and contracts, what were the new roadblocks you faced?

The rules are opaque, confusing, and ever changing. Meeting people is really difficult, especially without a previous network and/or career inside the department of defense. The MassChallenge community really opened a lot of doors and let us meet people throughout many government agencies, local, state, and federal.

It’s hard to stand out without past performance and the government is still learning how to best differentiate between nuanced technology companies and evaluate business models.

What were your experiences that highlighted how selling to the government differed from selling commercial? How did MassChallenge and MassChallenge partners help in this regard?

Selling to the government is all about building a coalition of willing users and buyers and proving that you are the best person to solve the problem through the contract vehicles that exist for a company at your stage with your experience. Selling to an enterprise involves convincing a small buying team that’s less interested and willing to take risks on innovative new technology, very few large enterprises want to be the first to do something new, though hopefully that’s starting to change.

MassChallenge helped us sell to the government by providing an initial network of stakeholders interested to refine our pitch and teaching us about how innovation contracts like SBIR can work for startups.

Where do you think SimpleSense is going in the next few years? Staying government-focused or coming back to commercial markets?

We plan to continue leveraging government R&D contracts to build information sharing networks across the country between regional authorities and Air Force installations.

The government helps us get into more markets more quickly and build the trust that we need with large enterprise customers. There’s nothing like having successful contracts with the Air Force to convince the private sector that your software is worthwhile.

SimpleSense is a dual-use company, 40% of our market potential is in the commercial enterprise market, while around 5% is defense. What’s interesting is that the government is spending more on innovation right now than the private sector, especially in the safety and security market.

Learn more about opportunieties working with MassChallenge at the below links and/ or subscribe to our newlestter!

The US Air Force Lab with MassChallenge