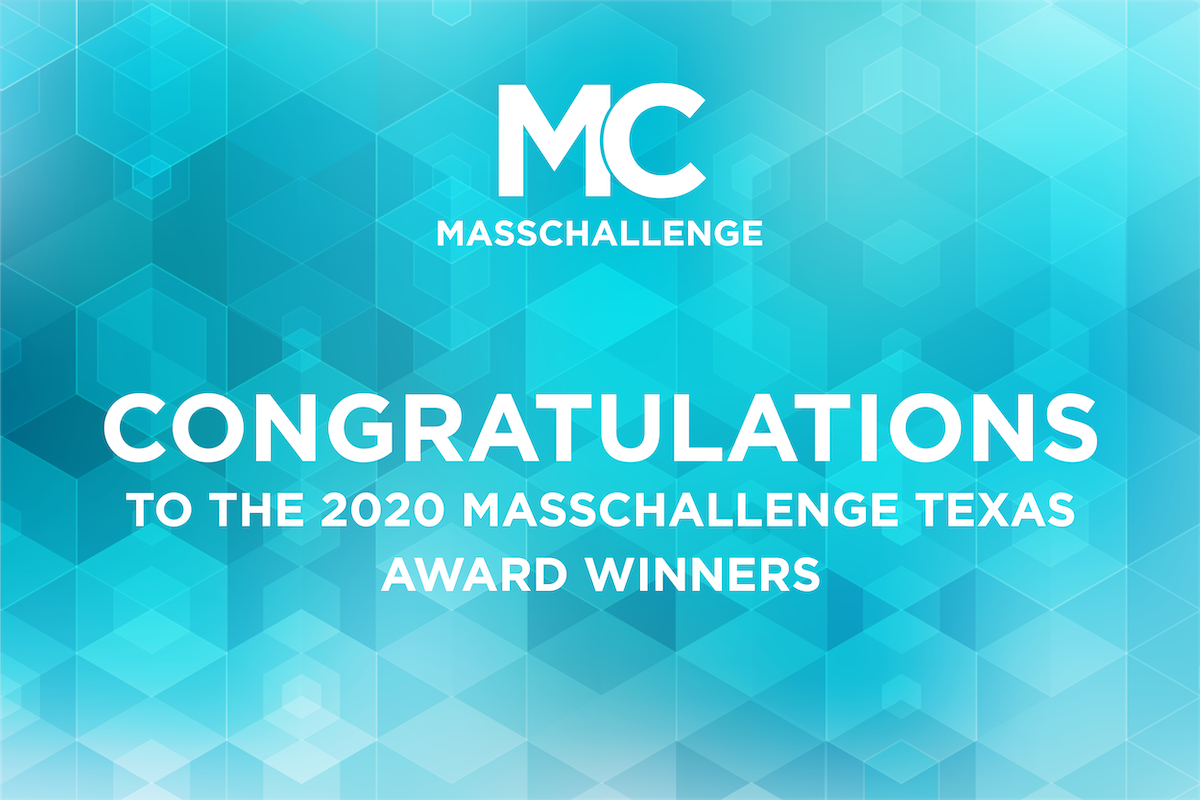 “As we look toward economic recovery in the Lone Star State, providing space for entrepreneurs to build and scale in Texas is a top priority. Organizations like MassChallenge help new businesses make an impact and we are excited to see the network’s continued growth and the value they provide entrepreneurs across our state,” said Adriana Cruz, Executive Director of Economic Development & Tourism for the Office of Texas Governor Greg Abbott. “Congratulations to the winners and all of the startups from this year’s Austin and Houston programs. The work you do now will have a positive impact on our future.”

“It’s a privilege to be a small part of the journey for the startups from this year’s 2020 Austin program, and I’m proud of the innovative solutions these startups have brought to the marketplace during such a challenging year,” said Mike Millard, Managing Director of MassChallenge Texas in Austin. “All of the startups from this year’s program exemplify the grit and tenacity needed to build sustainable solutions. At the end of the accelerator, these startups have raised $40M in funding, generated $17M in revenue, and created 328 jobs. They are on a great path to impact our future – the way we live, work, and play.”

“It’s been inspiring to sit with these founders, to watch them shift and pivot their businesses to meet market needs,” said Nancy Hayes, principal of the NKH Group. “The progress they made in such a short period is a testament to MassChallenge’s approach to connecting the entrepreneurs to the people and resources they need to grow and scale. The future looks bright with the entrepreneurs and leaders at the helm. I look forward to seeing the impact they make when creating the future.”

To close out the 2020 cohort, MassChallenge Texas in Austin and its partners awarded $400,000 in cash and prizes to top startups during the MassChallenge U.S. Awards on October 22, 2020. MassChallenge Rhode Island founding partner FM Global presented a sidecar award to an Austin startup worth $15,000 during the event. The MassChallenge U.S. Virtual Awards brought together more than 2,000 viewers for a livestreamed event to celebrate the transformative power of entrepreneurship. In total, MassChallenge and its partners awarded more than $1 million in cash and investment prizes to 34 startups from this year’s Austin, Boston, Houston, and Rhode Island accelerators. The event was hosted by Chris Denson of Innovation Crush, and the event featured a fireside chat between Arianna Huffington (Founder and CEO, Thrive Global) and Linda Pizzuti Henry (Managing Director, Boston Globe).

DanceFight (Austin, TX): DanceFight is a mobile video competition platform. Record yourself dancing to a song, challenge a friend, let the world determine a winner.

RealKey (San Francisco, CA): RealKey is an automated mortgage processing SaaS platform with only one touch through document-centric and network-effect.

At Ease Rentals Corporation (Round Rock, TX): At Ease is like Airbnb but for military. We guarantee all listings will meet federal lodging requirements; ensuring federal employees are reimbursed.

Civic Champs (Bloomington, IN): Civic Champs helps nonprofits truly engage with their volunteers while turning them into donors.

Muxy (Austin, TX): Muxy is an Emmy winning software startup focused on making live video an interactive experience for viewers and the broadcasters.

ABOUT THE 2020 MASSCHALLENGE U.S. EARLY-STAGE PROGRAMS

This year, the U.S. programs in Austin, Boston, Houston, and Rhode Island welcomed a total of 244 early-stage startups. Selected from thousands of applicants, the 2020 cohorts represent the best and brightest ideas tackling some of the world’s most massive challenges including affordable housing, Alzheimer’s disease, climate change, waste management and sanitation, and more. In total, the cohort represents 18 countries, 34 U.S. states and 5 industries: 36% High Tech, 32% Healthcare/ Life Sciences, 18% General/Retail, 7% Energy/Clean Tech, and 6% Social Impact; and 57% of the cohort has at least one female founder.