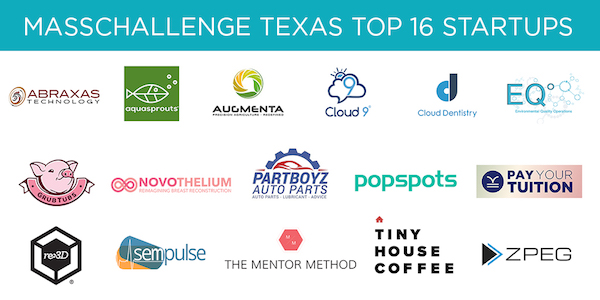 (AUSTIN, Texas – July 26, 2018; source: Juice Consulting) – MassChallenge, a global network of zero-equity startup accelerators, today announced the top 16 startups from its first Texas-based program, MassChallenge Texas. Representing some of the most innovative solutions across a range of industries, the top startups will now participate in a final round of judging where they will compete for shares of $500,000 equity-free cash prizes. The prize winners will be announced at the MassChallenge Texas Awards Ceremony on Wednesday, August 15, 2018 at the Hyatt Regency Austin.

“Each of 84 startups in our 2018 cohort have made tremendous progress throughout the accelerator and are now well prepared to make an impact in Texas and beyond,” said Mike Millard, Managing Director of MassChallenge Texas. “At MassChallenge Texas, we are working to strengthen the local ecosystem to help bring innovators from around the world to our great state.”

Over the course of the accelerator, 84 early-stage startups from around the world leveraged expert mentorship, tailored curriculum, corporate partnerships, and industry resources to launch and grow their companies – all at zero cost and for zero equity taken. The top 16 startups were identified following a judging round that  leveraged the expertise of industry visionaries and mentors, including Bob Bridge (SWAN), Matt Glazer (WeWork), Elizabeth Jennings (Venture Atlas Labs), Nick Nielsen (UPS), Paul O’Brien (Founder’s Institute ATX), Larry Peterson (TFIC), Lea Sims (USAA), and Melissa Young (Upstream). During the final judging round, the top startups will apply what they have learned throughout the program to demonstrate their growth and impact.

“My involvement with MassChallenge Texas as a judge, speaker, and mentor has been one of the most significant and rewarding opportunities,” said Elizabeth Jennings, Principal of Global Analytics for Venture Atlas Labs. “It is a privilege to watch these world-changing startups flourish. I look forward to continuing my involvement with the MassChallenge Texas program and celebrating the Texas startup ecosystem with this community.”

AquaSprouts allows anyone to easily bring an aquaponic or hydroponic garden into their home, office or classroom, right out of the box.

Augments is taking the guesswork out of fertilization and pesticide spraying in real time, with a machine vision/learning plug and play device.

Cloud 9 is on a mission to provide mental healthcare to those who need it most – before they land in ERs, jails, or on the streets.

Cloud Dentistry is an online/mobile marketplace that connects dental offices and staff for work assignments, in real time.

Partboyz Auto Part’s mission is to bring the car parts business in Africa into the 21st century.

Popspots is building AdMob for the physical world with an initial network in grocery, the highest traffic space in retail.

PYT, Pay Your Tuition is changing the way families finance and pay for higher education using technology to create the best private loan.

Applies to the ear and monitors vital signs within 2 seconds, non-invasively and in non-sterile conditions supporting triage & telemedicine.

ABOUT THE MASSCHALLENGE TEXAS AWARDS CEREMONY

At the Awards Ceremony, top influencers from the Texas innovation community – including potential investors and customers, MassChallenge mentors, and VIP community leaders – will come together to celebrate entrepreneurship and startup innovation. The August event is the first MassChallenge Awards Ceremony in Texas and will take place in Austin, the home base of the region’s inaugural program.

The co-keynote speakers will address the startup and VIP audience about their experiences building businesses, influencing change, and creating impact in Texas.

ABOUT THE INAUGURAL MASSCHALLENGE TEXAS ACCELERATOR