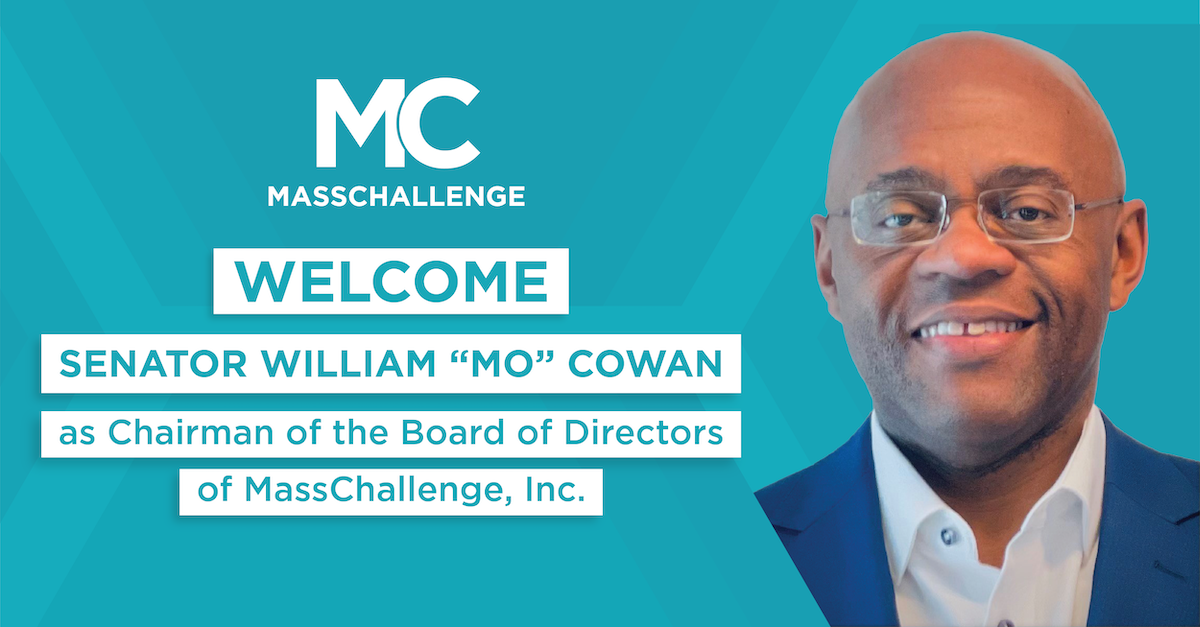 July 13, 2022 – Boston, MA: MassChallenge, the global network for innovators, today announced Senator William “Mo” Cowan has been elected Chairman of the board of directors for the global non-profit. Effective July 1, Sen. Cowan will assume Board leadership and partner with MassChallenge CEO, Cait Brumme, and his Board colleagues to amplify the impact of MassChallenge across the global innovation ecosystem.

“I feel privileged to take on this role at such an exciting time when MassChallenge’s mission to support entrepreneurs is more important than ever,” said Sen. Mo Cowan, Chair of the MassChallenge Board of Directors. “Entrepreneurship and innovation are powerful forces to drive progress and generate solutions for humanity’s greatest challenges, creating opportunity for individuals and cultures, and generating jobs for our economy. Since 2009, MassChallenge has led in the science of supporting founders through intentionally connected communities and continues to play a leading  role in the movement for a stronger future through collaborative innovation.”

Mo, who has been involved with MassChallenge since its launch in 2009, is a senior executive at Devoted Health, the tech-enabled all-in-one healthcare company founded to dramatically improve overall health and well-being for seniors by caring for them like family.  Immediately before joining Devoted Health, he led global public policy and government engagement for General Electric across multiple sectors, including healthcare and energy. Mo also led a national government affairs consulting group and served as interim United States Senator for the Commonwealth of Massachusetts, after serving senior leadership roles in the administration of former Governor Deval Patrick. In addition to his board work with MassChallenge, Mo serves on the boards of Goldfinch Bio, the Massachusetts General Hospital, the Edward M. Kennedy Institute for the United States Senate and University of Massachusetts Global. He also serves on advisory boards for Stackwell Capital and Duke University.

“Mo Cowan’s long history of leadership, coupled with his experience advising global organizations and passion for entrepreneurship make him an ideal person for this role,” said Cait Brumme, CEO of MassChallenge. “I am thrilled to partner with Mo as we strive to build upon MassChallenge’s leading work in building the locally grounded, digitally connected, and inclusive communities that will allow us to accelerate and scale our impact.”

MassChallenge is the global network for innovators. Headquartered in the United States with eight locations worldwide, it is the non-profit’s mission to help bold entrepreneurs disrupt the status quo and create sustainable change. Since launching in 2009, MassChallenge has run programs in 22 countries, supported more than 3,500 startups from around the world, and awarded over $17M in equity-free cash and prizes. Learn more about MassChallenge at masschallenge.org.